THE TRICKS OF TIME


PQ is making new designs on drawing paper every day. Our relationship is in flux. He is restless and pushing for more in life, dissatisfied with the way we are. We have been under much pressure in the last few years. A make it or break it challenge for our relationship.  I know some of it has to do with getting older, shorter of breath and now a new threat of compromised kidney function. Nevertheless, his energy is good and his stamina unaffected. More people are getting in touch with him out of the clear sky wanting blessings, or information about pueblo culture and the way things were—movie people, musicians and writers. This is what I saw and hoped to be a part of 20 years ago but I’ve always been too far ahead. When real time catches up to the vision, the vision itself becomes dim and tattered, like that favorite print that I save rolled up under the bed waiting for a time when I’ll have the money to frame it and the space to hang it. 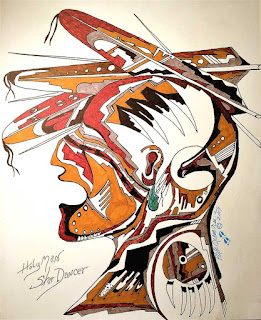 Time is upon us. A few days ago, we were waiting for a friend to arrive at one of our favorite Santa Fe restaurants. Across Guadalupe Street, PQ saw a neon sign on a second story window, “Native Lives Matter.” “That’s what I want to do, something to help my people, something meaningful that will inspire my people and remind them of what we are about.” A few days earlier, we had been watching “A brief but spectacular moment” on PBS featuring African American poet, Clint Smith. He delivered a poem about how America hides the realities of racial prejudice and exploitation by our founding fathers behind a whitewashed (pun intended) version of history. PQ told me, “I want you to contact that poet and tell him how much I appreciated that message and I would like to work with him in some way, it’s important,” So, I did. Clint Smith answered with a simple but warm acknowledgement and thank you. I believe that the energy trajectory is gaining momentum and it’s going to have an effect. We aren’t getting younger but we as individuals are going through a ripening process and harvest time is here.

I believe this is the most important time for the most important ascension. I’m not referring to a New Age plan to escape this uncomfortable and sometimes frightening world. The most important ascension is we moving from purely personal motives and desires to the experience of relatedness to all the other beings and even the cosmos. That is a bit too heady, so I’ll break it down. We are going through a cleansing of our personal cooties, the ones that have kept us scratching personal itches too long. Another analogy comes to mind, just like with the country, our windshields are cracked and spattered with mud and we’ve just been tolerating it.

The alienating beliefs and attitudes in our world are becoming dangerously extreme. There is great danger that this division will destroy the consciousness needed to resolve that division. People are taking sides in a way that prevents healing and instead further irritates open wounds. Poet Robert Frost had this to say about inner conflicts, “The best way out is through.” To me this means the answer is not in escalating conflict between opposing forces but in transcending the divisive extremes to a higher encompassing third approach.

Some people believe our new president is going to answer their prayers and some believe he will destroy the country and beyond.  My personal opinion is that he often functions as Trickster, breaking through the weak walls, accidentally shining the light on the wrinkles and warts of a system that is full of contradictions and compromise, even as he charges in like a Bull in a china shop.

On another level, PQ’s design styles are changing.  Possessed by a strong spirit that is fine and focused like a laser he cranks the volume up on his Bose and paints all day.  His guiding Medicine teacher is pushing toward the upper world.  There is sometimes confusion as the new boss struggles with the haughty young man inside who won’t give up easily. The young guy still has some grievances and unfinished business, but this incoming spirit has an authority that won’t be stopped. I sense his amazement, joy and strength. 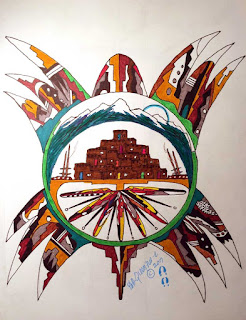 Real life demands that we take it on its own terms. It is much like a nocturnal dream and doesn’t condescend to waking logic.  The countenance of Coyote the Native American trickster is laughing at us, all of us. Here we are at the beginning of this New Year and the shadow truths behind both our institutions and self-images are bulging furtively around the edges of their sanctified masks.  As deceptions grow, they fit less well in their containers.

A few weeks ago, something shifted.  I had a quick glimpse of the mask I’d been wearing—a bland self-effacing mask that I thought would be neutral and nonthreatening but was completely contrary to my essence. I learned to wear this mask in early childhood and then identified with it (for those of you into astrology, I have the Sun, Moon, Mercury and Jupiter in the 12th house, all squaring Neptune in the 4th house).  I covertly projected and supported my true birthright essence onto friends and lovers who usually ended up rejecting my masked persona.

I have no idea how the future will unfold for us as individuals the nation or the world.  The Universal Command Force doesn’t confide the big picture to the likes of me, probably realizing that I’m all I can handle; however, Coyote always screws up while trying to trick others. Remember that when in despair of the future world.
Posted by Marti Fenton White Deer Song at 2:50 PM 2 comments: Links to this post

Links to Other Sites